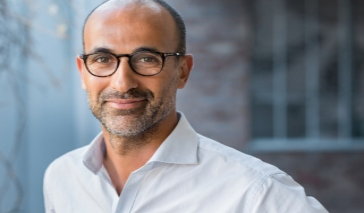 What to Know About Vasectomy - Permanent Birth Control for Men

About 100 million men worldwide have had a vasectomy, a highly effective procedure used as a permanent method of birth control. A vasectomy is the safest way for men to get sterilized, making it a good alternative to the riskier and more expensive tubal ligation for female partners.

If you’re thinking about transitioning to permanent birth control, here is some important information about vasectomies to help you make the right decision.

What is a vasectomy?

A vasectomy is a simple surgery done by a doctor in an office, hospital, or health clinic and involves cutting or blocking sperm so that it can’t leave your body during ejaculation. The procedure usually takes 10 to 30 minutes and is about 100 percent effective at preventing pregnancy. It’s meant to be a permanent method of sterilization, though in some cases it can be reversed.

Despite common myths, a vasectomy won’t affect your testosterone levels since your testicles release the hormone through your bloodstream, not through the vas deferens. This means the surgery won’t affect your sex drive, facial hair, deep voice, and other masculine traits.

What happens during a vasectomy?

Your doctor will use one of two surgical methods to perform a vasectomy — the traditional scalpel method (incision method) or the no-scalpel method.

During a scalpel vasectomy, your doctor will start by injecting a local anesthetic into the skin of your scrotum. If you want to avoid needles, your doctor may use a pressurized jet spray to deliver anesthetic over the vas deferens. Then they will make a small cut in the upper part of the scrotum and locate the vas deferens, withdrawing part of it out of the scrotum. 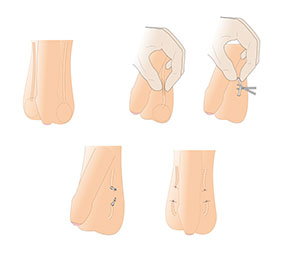 Your doctor will then cut the vas deferens and seal the cut ends by tying them, heating them, or using surgical clips. After the cut ends are sealed, they will be returned to the scrotum and the incision area of the scrotum will be closed or left to heal on its own.

In a no-scalpel vasectomy, your doctor will feel for the vas deferens under the skin of the scrotum but doesn’t make an incision. Instead, they use a tiny clamp and pointed forceps to puncture the skin and reveal the vas deferens. The no-scalpel method is generally safer and appeals to patients looking to avoid incisions. It also eliminates the need for sutures that some scalpel vasectomies require.

What happens after the vasectomy?

Most people recover from a vasectomy within a few days, though it’s best to take a week off and avoid any hard physical labor or exercise during that time. You can also start having sex as early as a few days after your vasectomy, but the procedure won’t prevent pregnancy right away.

You’ll know if your vasectomy is fully effective within about 3 months after the surgery. Your doctor will do a simple analysis of your semen to make sure that it is sperm-free. Until then, you should still use a condom or other forms of birth control to prevent pregnancy.

Having a vasectomy won’t affect sexual intercourse, as your orgasm and ejaculation will feel the same. You’ll also have the same amount of semen, and it will look, taste, and feel the same as before. The only difference is it won’t cause pregnancy. Your body will simply absorb the sperm.

One important thing to remember, however, is that the vasectomy will not protect you from sexually transmitted diseases, so you may still want to use a condom.

Vasectomy risks and side effects

Vasectomies are usually really safe. After the surgery, you might have slight bruising, swelling, and pain, but these symptoms should get better within a few days. Some patients may even have a bruise on the penis after surgery, but this is also normal, according to Urologist John C. McHugh.

McHugh says “There are planes of tissue in the scrotal area and penis that are connected, so tracking of blood to this area is common. If it improves then all is okay; however, if it progresses or if there is redness let your urologist examine you.”

One possible risk is that your surgery will lead to an infection, like any other medical surgery. If this happens, your doctor may give you an antibiotic to treat the infection.

There’s also a chance of hematoma (bleeding under the skin) or swelling caused by sperm leaking from your vas deferens, but these problems usually go away on their own. Very rarely, the cut ends of your vas deferens grow back together.

Some patients report feelings of aching and discomfort in the testicles several weeks after a vasectomy, but McHugh reports that this feeling will go away. He says, “You are experiencing the body's reaction to the change in the dynamics of the flow of fluid from the testicles. Think of it as a very small change in the pressure gradient.” McHugh also recommends taking Advil nightly to relieve pain during the recovery process.

How much does a vasectomy cost?

Getting a vasectomy can cost anywhere between $0 and $1000, depending on factors like your health insurance and what kind of procedure you get. If you are enrolled in certain health insurance plans, Medicaid, or other government programs, the surgery might be free or low cost.

Can I undo a vasectomy?

You can undo a vasectomy with a surgery called a vasectomy reversal. The procedure reconnects the cut ends of the vas deferens to allow sperm to mix into the semen, which can then cause pregnancy after ejaculation during sex. This method is called a vasovasostomy.

If the sperm flow is blocked because of scar tissue, your doctor might perform a more difficult procedure called a vasoepididymostomy. For this surgery, the vas deferens will be attached directly to the epididymis, a small organ in the testicles where sperm is stored.

While almost all vasectomies can be reversed, the pregnancy rates after surgery will range from 30 percent to 90 percent. Factors affecting fertility include the partner’s age, the surgeon’s experience, and training, and the time since your vasectomy. The longer it has been since the vasectomy, the less likely it is that the reversal will work.

Find a vasectomy specialist near you!

Vasectomy.com offers the most comprehensive directory of qualified urologists who perform vasectomy and vasectomy reversal. Find a leading vasectomy doctor near you.