Home>Articles>Vasectomy>Resources>Comedic Relief: Stand-up Comedian Sits Down for a Vasectomy 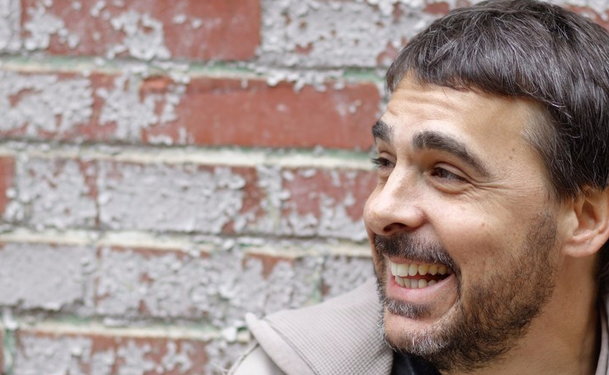 Comedic Relief: Stand-up Comedian Sits Down for a Vasectomy

Tom Simmons let the world—or at least those following his Twitter account—know that getting a vasectomy is no big deal, really. This award-winning stand-up comedian, who has appeared on Comedy Central and Showtime and whose routines are in regular rotation on SiruisXM, provided a candid snapshot of his vasectomy when he live-tweeted his experience, offering some laughs along the way. He now uses material inspired by those first tweets in his regular stand up routine. Vasectomy.com caught up with the professional funny man to find out how it all went down.

Vasectomy.com: Your website bio says, “Age: I can’t remember.” Is it still hazy, or can you tell us?

Tom Simmons: Ha ha, yeah, I am 46 and I have an eight-year-old son, Owen. So-named since I will be doing that for the rest of my life.

V.com: Was the decision to get a vasectomy a difficult one?

TS: I knew I was I was going to do this eventually. We had talked about whether or not we wanted to have another kid and, when we decided we didn’t, it seemed like the best solution. I don’t like using condoms, I spend like $13 a year on them, and she was on the pill for a while but that is not right for her long-term.

I told my regular doctor that I was interested and she referred me to an urologist. My doc was so nonchalant about it, like it is no big deal. I am so surprised there is a stigma to it: It is such a simple procedure. People tell me I am brave to do it. Brave would be looking my wife in the face and expecting her to get her tubes tied, with major surgery and recovery.

V.com: Why did you take your vasectomy to Twitter?

TS: On Twitter and Facebook you can broadcast thoughts instantly. Everything in life is material for a joke. Tweeting is kind of perfect—you can send out those pieces of comedic inspiration and see how they go over. Plus, it is on the record so you have it for future material.

V.com: You live-tweeted the procedure from the doctor’s office, a heroic feat of multitasking. What was that like? Were you sitting there with your smartphone in hand while the nurse prepped you for the procedure?

TS: There was no prep really. I had already shaved myself ahead of time, so the nurse came in, told me to drop my pants and underwear, then said to cover up with the sheet—which was more like a small napkin square.

After about five minutes, the doctor came in and, when I asked if I could tweet the procedure, he said, “Sure, you are a bigger man than most.” Which was a good thing to hear since he was holding my balls.

I thought I would be tweeting a bunch of jokes but I was just shooting blanks.

TS: A friend tweeted me that I had just given my swimmers a death sentence and now I would only have the equivalent of tonic in a vodka tonic. My response was that my wife’s vagina no longer drinks, so that should work out.

V.com: And where was your wife during all this?

TS: My wife stayed in the lobby. I was thinking she should be with me to watch our future sons end. I was there with her when my son was born. But at one point, she shouted out to the doctor, “Add a couple of inches of swelling for me!”

V.com: You tweeted that after reading about the procedure, you knew to to expect blood, smoke, and a kick-to-the balls sensation, all of which, in your opinion, are preferable to condoms. That scenario sounds like a violent Western—were any of those things at play?

TS: It never felt like a kick in nuts. Well, when the doctor numbed my balls with some sorta spray shooter, maybe 15 times, that was like being repeatedly kicked in nuts by a mouse. And there was white smoke coming from my balls at one point. But the doctor was so nonchalant that my biggest concern was second-hand smoke. The biggest physical discomfort of the whole procedure was having a strange man hold my balls.

V.com: What is one piece of advice you would give to a guy planning on getting a vasectomy?

TS: Don’t look down! Oh, yeah, and milk it for all that it's worth.

V.com: How is the recovery going? You had it done a week and a half ago, are you good to go with most activities now?

TS: It was key having a jock strap with ice packs in its cup.I sat around on the couch the first day and then the next day I ran some errands. Having my wisdom teeth out was worse. For two or three days there was tenderness—it felt like when you first hook up with someone and are sore from sex after three days of going non-stop. The most annoying part about the recovery is the giant cone I have to wear to keep my wife from licking the stitches. I have told her she needs to help me with physical therapy: I need to shoot off 20 times before going back in to get my sperm count checked.

V.com: So it sounds like you're ready to test out the modified equipment. Were you left with any questions?

TS: When can I resume sexual activity and sports? And where does the sperm go? There are so many things that I didn’t think of ahead of time. Oh yeah, and do pro-lifers give vasectomy doctors a hard time?

V.com: So far it seems the pro-life contingent is more concerned with the choices that women make, not so much men.

TS: Get your vasectomies now, men, before the fundamentalists figure out that we, too, are ending life. Soon they won’t just be satisfied with dictating a woman’s choice. We are next.

The cool thing is it takes less time for me to get a vasectomy than it takes them to make a ridiculous protest sign showing my dead sperm.

V.com: Anything else before we go?

TS: The urologists who perform vasectomies should play up the stats on overpopulation, and what a giant threat it is to the planet and humanity as a whole. These doctors are heroes.

In conclusion: After getting a vasectomy, I don’t think you will notice a vas deferens in your lifestyle.

After we were done groaning, we thought we should take some time to answer Tom's questions, most of which are pretty common among men considering the procedure.

Q: Where does the sperm go?

A: Vasectomies don't prevent sperm production, they just interfere with its delivery. Now, instead of being mixed with ejaculate, the sperm are reabsorbed by the body in much the same way it reabsorbs red and white blood cells when they die.

Q: How soon can I have sex and play sports?

A: Most urologists recommend that you wait a week before participating in any activity that requires exertion, such as running and other sports. The same goes for sex: Wait at least a week, and even then be sure to use another form of birth control until your doctor confirms there is no sperm in your semen.

A: Alright, so this isn't necessarily a common query but it's an interesting one. Vasectomy isn't really on the radar of pro-life advocates, but occasionally pro-choice advocates suggest banning vasectomy as a way to point out that it's unfair that the government legislates what can happen to women's bodies but not to men's. In 2012, democrats in Georgia introduced an anti-vasectomy bill to that effect.

Comedic Relief: Stand-up comedian live-tweets his vasectomy
His and Hers: Vasectomy from a couple's perspective
Vasectomies From the Couple's Perspective