Home>Articles>Vasectomy>Alternatives>Vasectomy vs. Other Types of Contraception 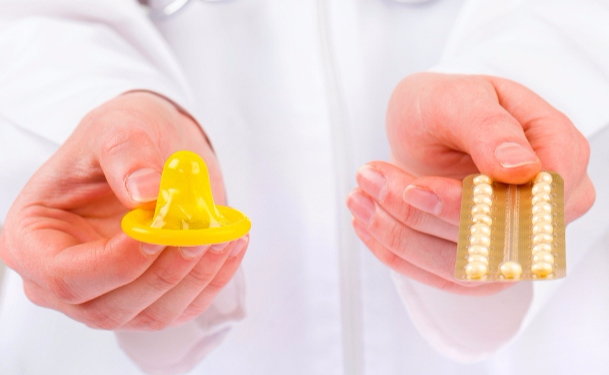 Vasectomy vs. Other Types of Contraception

How Does Vasectomy Compare to Other Types of Pregnancy Prevention Options?

Vasectomy is a safe, effective, and permanent form of contraception, but it's not the right choice for everyone. While there are many birth control options to choose from there is no one "best fit" for everyone, so consult a doctor about the best pregnancy-prevention method for you and your partner.

Condom — Condoms are thin sheaths, usually made of latex, that are worn over the penis so as to block ejaculate during sex and prevent transmission of AIDS and other sexually transmitted infections (STIs). Used properly, condoms fail about 2 percent of the time. Used improperly, they can have a failure rate as high as 18 percent. Risks and side effects: Condoms can cause irritation or allergic reactions. They can also break or leak during sex, increasing the risk of unwanted pregnancy.

Vasectomy — Vasectomy is a simple surgical procedure that blocks the tubes that carry sperm out of the testes to permanently sterilize a man. Vasectomy has less than a one percent chance of failing to prevent a pregnancy. Risks and side effects: As with any surgical procedure, risks include bleeding or infection. Additionally, vasectomy does not protect against STIs.

Experimental Methods — There are a number of experimental drugs and other methods of male birth control under development that have not been approved for use in the U.S. One that has garnered numerous headlines is a procedure known as RISUG, or reversible inhibition of sperm under guidance. In this procedure, a physician injects a compound into the vas deferens tubes. As the sperm pass by the drug, it damages them so they can't effectively fertilize an egg. RISUG is in very early testing, and its safety and efficacy have not yet been established. Researchers have also been working on oral contraceptives for men but, to date, have not been successful.

Female Condom — The female condom is a thin pouch designed to be inserted in the vagina. It prevents pregnancy (although less effectively than the male condom) and may offer limited protection against STIs. When used correctly, it is about 95 percent effective at preventing pregnancy; in reality, it has a failure rate of up to 21 percent. Risks and side effects: The female condom can be cumbersome to insert correctly, and can cause irritation and allergic reactions.

Diaphragm — This device consists of a flexible dome covered with spermicide that is inserted into the vagina to cover the cervix. Diaphragms have a failure rate up to 12 percent. Risks and side effects: Diaphragms can cause irritation, allergic reactions and urinary tract infections. There is also a rare risk of toxic shock if they are kept in place for more than a day. Diaphragms do not protect against STIs.

Cervical Cap — Similar to a diaphragm, a cervical cap is a deeper cup that is coated with spermicide and inserted into the vagina to cover the cervix. It has a failure rate up to 23 percent. Risks and side effects: The cervical cap can cause irritation, allergic reaction, abnormal pap smears, and toxic shock -- in rare cases -- if left in too long. The cap does not prevent STIs.

Sponge — The sponge is a disk-shaped device soaked in spermicide that is inserted into the vagina. It has a failure rate up to 24 percent. Risks and side effects: The sponge can cause irritation, allergic reaction, can be difficult to remove and, in rare cases, can cause toxic shock syndrome if left in place for more than a day. The sponge does not protect against STIs.

Spermicide — Spermicides come in the form of foams, creams, jellies and tablets that are inserted into the vagina. When used on their own, failure rates can be as high as 28 percent. Risks and side effects: Spermicides can cause irritation, allergic reaction and urinary tract infection. Spermicide does not protect against STIs.

The Pill — The birth-control pill comes in different formulations of the hormones estrogen and progestin, or just progestin alone. The hormones work by preventing a woman's ovaries from releasing eggs, making it difficult for sperm to reach the eggs and fertilize them. The failure rate can be as low as 2 percent, or as high as 9 percent, depending on pill type and user error. Risks and side effects include: irregular periods, nausea, breast pain, headache and dizziness. The pill does not protect against STIs. Some women should avoid the pill because it may increase their risk of blood clots, stroke, breast cancer or other serious diseases.

The Patch — Similar to the pill, this skin patch delivers estrogen and progestin to prevent pregnancy. Its failure rate is about the same as the pill -- at between 2 and 9 percent -- but it may not be as effective in women weighing over 198 pounds. Risks and side effects: The patch delivers a higher dose of estrogen than the pill, something that poses an increased risk of serious side effects like blood clot or stroke. The patch does not protect against STIs.

Vaginal Ring — The vaginal ring is a flexible device designed to be inserted in the vagina, replaced once a month, and deliver a steady amount of estrogen and progestin. The ring offers no protection against STIs. Side effects and failure rates are similar to the pill, but there is an additional risk of vaginal discharge and discomfort.

Birth-Control Shot — The shot is an injection of the hormone progestin, and is given every three months. It has a failure rate up to 6 percent. The shot does not protect against STIs. Risks and side effects include: spotting, loss of bone density, headaches, weight gain, anxiety, and abdominal pain.

Morning-After Pill — There are two versions of the morning-after pill, which was developed to be taken following unprotected sex so as to reduce the risk of pregnancy. The progestin-based pills--Plan B, Plan B One-Step and Next Choice--prevent pregnancy if they are taken as soon after sex as possible. The failure rate is up to 12 percent and side effects include pain, nausea, vomiting, tiredness, and headache. The progesterone-based Ella pill can prevent pregnancy when taken up to five days after unprotected sex, but has a failure rate as high as 40 percent. Side effects included dizziness, fatigue, menstrual or abdominal pain, nausea, and headache. Neither type of pill prevents STIs.

IUD — The IUD, or intrauterine device, is a T-shaped device that is inserted into the uterus, and is made both with and without an outer coating of progestin. It prevents pregnancy by physically preventing sperm from reaching and fertilizing eggs, and by preventing fertilized eggs from implanting in the lining of the uterus. The failure rate is less than 1 percent. Side effects can include cramps, irregular bleeding or periods, abdominal pain, ovarian cysts, pelvic inflammatory disease, and infertility. In rare cases, an IUD can result in an ectopic pregnancy, cause a life-threatening infection, get stuck in the uterus, or migrate outside the uterus. IUDs offer no protection from STIs.

Implants — Implantable rods deliver a three-year, controlled-release course of progestin via rods injected under the skin of the upper arm. The failure rate is less than 1 percent, but they offer no protection from STIs. Side effects include: irregular bleeding, weight gain, and breast and abdominal pain.

Tubal Ligation — Informally called getting ones "tubes tied," the female sterilization procedure involves sealing off the fallopian tubes so that sperm cannot reach an egg. It is a permanent form of birth control, with a failure rate less than 1 percent. Risks and side effects include: pain, bleeding, infection and ectopic pregnancy. There is no protection from STIs.

Essure — Essure is a permanent form of sterilization that is less invasive than tubal ligation. Instead of open surgery, this procedure uses a catheter threaded through the vagina to insert a flexible coil into the fallopian tubes to block them. The failure rate is less than 1 percent, and risks include pain and ectopic pregnancy. This procedure does not prevent STIs.